Ontario air worse than it appears

New daily testing will better reflect risks to our health 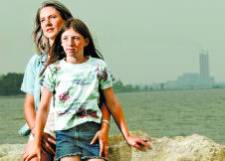 FIGHTING FOR AIR: Andrea Long and her daughter
Callan both suffer from asthma and worry about the quality of air in Toronto.

The truth about the air we breathe in Ontario is about to be revealed.

And it’s going to be ugly.
With the province already heading for its smoggiest summer on record, an even bleaker pollution picture will emerge beginning next week as Ontario upgrades its Air Quality Index (AQI) to better reflect actual levels of poison.

For the first time, it will begin reporting levels of “fine particulates” — microscopic fragments of dust, fumes and chemicals that invade our lungs and can cause a host of health problems from asthma to cancer to heart attacks.

Currently, smog warnings are triggered in summer due to high levels of ozone, a gas that peaks between May and September. Expanding the index to include fine particulates, which can soar throughout the year, will mean “poor” air days could happen any time, including the depths of winter.

And bad air can take a heavy toll. Public health authorities blame air pollution for an average of 1,000 premature deaths each year in Toronto.

Measurements of particulates in downtown Toronto, recorded by The Star over the past week, frequently rose to levels experts call a serious threat to health.

The readings showed that, even when Ontarians are told their air is safe, there is no cause to breathe easy.

The province’s AQI, announced each day in newspapers, on television and the Internet, has painted a relatively cheery portrait of air quality in Ontario.

“Ontario has good air quality 90 per cent of the time,” claims the provincial Ministry of the Environment Web site. But that doesn’t mean our air is safe to breathe. Experts say such positive assurances are deceptive and create a false sense of security.

“It’s misleading,” says Pengelly, a professor of medicine at both McMaster University and the University of Toronto. “It doesn’t reflect the reality of what we’re breathing and what it does to human health.”

No one really knows what level of air pollution is safe.

While the AQI has been telling us our air quality is “good” or “very good” almost all the time, studies show that thousands of Ontarians are dying prematurely or being hospitalized each year due to smog-related pollutants.

Adding fine particulates to the index should increase the number of smog warnings and potentially double the number of “poor” air quality days in Ontario, experts say.

According to one proposed method of measurement, Toronto would have pollution levels posing a “high” or “extreme” health risk one day out of every four.

“Fine particulates are responsible for a significant amount of health problems,” says Monica Campbell, an air quality expert with Toronto Public Health. “Yet there’s been little attempt to give the public a greater understanding of the health risk.”

“When I run, I start coughing a lot,” says Callan Long, a 10-year-old Mississauga girl who suffers from asthma, along with her 13-year-old sister and mother, one of a dramatically growing number of young people to have the disease. Together, the three take medication up to four times a day to help them breathe.

“It gets much worse on bad days when it’s really hot,” she said, adding she often coughs through the night and can’t sleep when the air is particularly bad.

Outside Union Station last week, about 30 teens stepped off two idling school buses and into a chemical soup. The air filling their lungs, and those of hundreds of passing pedestrians, was packed with tiny particles that can cause an array of health problems.

At one point, the Star’s testing showed the teens were inhaling air containing 220 micrograms of certain-sized particulates — a concentration experts fear could alter the way young bodies develop, trigger respiratory conditions, and cause long-term health problems with extended exposure.

The Star used a portable monitoring device that measures particulates. Readings were taken this past week outside Union Station every five minutes for half-hour periods several times a day, and then averaged.

The results were unsettling.

Fine particulate levels, not reported in the AQI, were dramatically high on several occasions.

While the province has traditionally measured “suspended particles” in the air, its equipment hasn’t been sensitive enough to trace the smallest particles that pose the greatest danger.

Within days, the province will target these tiny threats by measuring particles as small as 2.5 microns. One micron is 50 times smaller than the width of a human hair.

Ontario will also focus on particles 10 microns in diameter, called PM 10. The provincial standard for PM 10 is 50 micrograms per cubic meter over a 24-hour period.

The Star’s readings frequently exceeded the upper limits of that concentration during downtown rush-hour periods, when the streets teemed with people.

On Aug. 9, a day that featured a cloudless blue sky and an AQI rating of “good,” measurements of PM 10 rose to an average high of 211 micrograms during the morning rush hour — more than four times the 50-microgram cut-off.During five days of readings, it was the morning rush hours — a time when hundreds of thousands of people fill the downtown core — that consistently registered the highest levels of PM 10.

Ontario has actually been measuring fine particulate matter in some cities for several years because of its known contribution to health problems. But the province has not included those measurements in its AQI calculations.

So while the public health information has been available, it hasn’t been released.

“There has been concern over the instrumentations and the reliability of the results,” explains David Yap, co-ordinator of air quality with the Ontario Ministry of Environment and Energy. “It’s been a gradual evolution. The pollutants that have given us the biggest concern, and exceeded (levels) the most, are ozone and particulates.” Ontario is the first province to add fine particulate data to its Air Quality Index. Other provinces are expected to do the same in coming months.

But many experts say the province is still only going half way. They say it fails to achieve the real goal: An index that warns people about health risks, rather than simply measuring air quality.

And they’re pushing for a new health-based AQI by as early as 2004.

The prevailing idea for reworking the AQI would toss out words such as “poor,” “moderate,” “good” and “very good” to describe air quality — replacing them with terms that reflect the threat to health such as “low,” “medium” and “high” risk.

Campbell says the public has long been misled by ministry assurances that “good” air on the index has “no known health effects.” “That’s in conflict with scientific studies,” she says. “It would be appropriate to have more careful messaging so people with special vulnerabilities can take steps to improve their health. The AQI (should) help people protect themselves.”

The push to transform the index into a health-based warning system is driven by a new realization among scientists — there is no safe level for some of the pollutants we inhale every day.

Even when ozone and particulate levels are low, there can be a loss of lung capacity in all of us, experts now say.

“There’s no lower limit that’s safe,” says Dr. Jim Young, one of the original creators of the AQI system and a consultant specializing in air quality. “We now know air pollution is one of the determinants of how long we live as humans.”

So it’s misleading to label air containing even low levels of ozone or fine particulates “good,” many scientists now agree.

“It’s something the scientific community has been really struggling with,” says Mark Raizenne, air quality research manager for Health Canada. “We’ve been underestimating environmental impacts for a long time. If you thought the air had no effect on your health, those days are gone.” Phil Blagden, heading a federal task force looking at a health-based AQI for Canada, says there is widespread agreement among researchers that the index must change to reflect growing health concerns.

“We’re trying to cope with data that tells us there’s no detectable threshold for impact on human health, so what does it mean when we say air quality is `good?’” he asks.

Experts agree an AQI based on health risk would dramatically change the message the public receives about the air it breathes, painting a much gloomier — but more useful — portrait.

Windsor topped the bad air list in that study, with 33 per cent of the year registering as a “high” or “extreme” health risk. Toronto was close behind, at 25 per cent. The picture is better in other parts of the country with Ottawa at 10 per cent, Calgary at 2 per cent and Vancouver at 0.3 per cent.

Among the more troubling findings in North American studies is evidence of dramatic physical changes in young people as a result of pollution.

That finding was echoed more recently in a groundbreaking California study that found smog not only makes asthma worse, but may actually create asthmatics. Active children in high smog areas were three times more likely to develop asthma than their counterparts in clean-air zones.

Another Health Canada study last year showed a 35 per cent increase in daily hospitalization of Toronto children under the age of 2 for respiratory problems when ozone levels in the air were high.

“If you live in an area where pollution levels are high, you’re more likely to have respiratory problems such as asthma or bronchitis and your lungs will be less likely to reach full capacity,” says Raizenne. “It’s affecting everybody, not just people with illnesses. And you have no choice. It’s obligatory exposure as a result of where you live.”

On most days, pollutant levels are just as high — or even higher — in rural Ontario as in downtown Toronto. Air currents carry toxins far and wide, much of them coming from smoke-belching factories and power plants in the United States.

“There’s nowhere you can move to,” says Pengelly. “It doesn’t matter whether it’s London, Peterborough or even Dorset, you’re going to be subject to this problem.”