Japanese toning down the fumes – Research linked to harmful chemicals 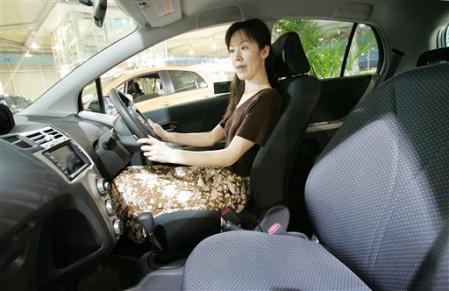 Reiko Ito sits in the driver’s seat in Vitz, the Japanese automaker’s one of the latest vehicles that reduced cabin smell, at Toyota Motor Corp.’s Tokyo showroom.

But the unmistakable new-car smell may soon be heading the way of the rumble seat: Recent research linking it to a toxic cocktail of harmful chemicals is spurring efforts by Japanese automakers to tone down the fumes.TOKYO – Anyone who has pulled away from the dealer’s lot in a shiny, new sedan knows the seductive scent of fresh plastic, paint and upholstery that evokes a rush of pride and consumer satisfaction.

Japanese manufacturers, including Toyota Motor Corp., have become the first to set an industry-wide goal of reducing cabin concentrations to within government guidelines.

“The industry in Japan as a whole has recognized the need for this and is co-ordinating efforts,” Toyota spokesman Paul Nolasco said. “Cutting down on the things that lead to these smells is only something that can be better for you.”

The new-car smell emanates largely from chemicals known as volatile organic compounds, or VOCs, that leach from glues, paints, vinyls and plastics in the passenger compartment.

The fumes can trigger headaches, sore throats, nausea and drowsiness. Prolonged exposure to some of the chemicals can lead to cancer, though there’s no evidence linking that to concentrations in cars.

Critics liken the problem to so-called sick-building syndrome, which traces some illnesses to similar agents seeping from the walls, carpets and fixtures of new buildings.

Just sitting in a new car can subject riders to toxic emissions several times the limits deemed safe for homes or offices by some health authorities, though the problem tends to dissipate after about six months, according to a 2001 study by Australia’s Commonwealth Scientific and Industrial Research Organization.

“We find new car interiors have much higher VOC levels than any building we’ve researched,” research leader Steve Brown said. “Ultimately, what we need are cars with interior materials that produce lower emissions.”

Japanese automakers are now trying to do just that.

Earlier this year, they agreed to cut cabin levels of 13 of the compounds, including possible cancer-causing agents styrene and formaldehyde, by 2007 to match Japanese health ministry guidelines for air quality in homes.

The Japan Automobile Manufacturers Association initiated the drive after tests found some models made by three of the nation’s top carmakers failed to meet government recommendations.

The industry group refused to identify which companies or models were evaluated.

Automakers worldwide have been trying to reduce volatile organic compounds for years.

Most of Japan’s top five makers – Toyota, Nissan, Honda, Mitsubishi and Mazda – are already rolling out cars in compliance and touting the lower volatile organic compound levels as a key selling point, a move that is likely to catch on globally.

“There is good potential for the Japanese to take the lead in this field,” said Koji Endo, and auto analyst with Credit Suisse First Boston in Tokyo.

“People are starting to feel the VOCs are an issue, and the new efforts are one advantage that they (Japanese manufacturers) can claim.”

Brown says he does not know of any government with volatile organic compound guidelines for car interiors, but says matching building levels is a good start. Japan’s recommendations were adopted in 2002 to combat sick-building syndrome.

The U.S. Environmental Protection Agency sets no guidelines for volatile organic compounds in non-industrial settings, though formaldehyde is regulated as a carcinogen by the Occupational Safety and Health Administration.

Toyota, Japan’s largest automaker, currently has six models on the road that meet the new standards, while Nissan has four.

Honda’s new Civic, unveiled this month, is that company’s first, while Mitsubishi will begin it’s lineup with the “I” next year.

All say they are on track to have all new models pass muster from 2007.

While some customers complain about the new-car smell, others cherish it enough to have spawned a cottage industry in aerosol “new-car sprays” to keep their rides smelling fresh from the factory.

“Some people are annoyed by the smell and some people love it,” Honda spokesman Takayuki Juji said. “This is not just for Honda users, but for all users.”