Just because you ‘go’, doesn’t mean it’s gone.
Researchers around the globe have routinely tested the sewage of major cities to get a handle on trends in drug use.

In 2008, research by the Mario Negri Institute for Pharmacological Research in Milan, Italy, found 1.2% of the population of that city use cocaine.
Dozens of cities in the U.S. and Canada — including Vancouver, Montreal, Winnipeg, Calgary and several communities in southern Ontario — have been tested for a wide range of drugs, including legal pharmaceutical prescriptions.

The Canadian cities produce a chemical cocktail of everything from anti-epileptic drugs to psychiatric medication.
Among findings in the U.S. is that while the use of methadone, a synthetic opioid used to curb drug dependency, and methamphetamine — crystal meth — stayed constant over 24 days, cocaine use seemed to jump on weekends.

Researchers say they can’t trace drug use back to individual toilets, but hope sewage testing may be used to test a population’s larger health trends.

Experts say we’re just now starting to understand the impact these chemicals, that bypass most of the filtering, have on the environment. Scientists have found male fish are being horribly altered — including carrying eggs in their testes — by high levels of the female hormone estrogen.

“The question of chemicals in sewage is complex,” says William Oldham, an expert in biological wastewater treatment at the University of British Columbia.
It’s now, he adds, the number one concern among those who have to deal with what we flush behind.

It couldn’t be more Canadian if you wrapped it in back bacon and dipped it into your morning double-double.

An iconic, postcard-pretty Alberta town, where a depth of wide-open land nudges up against rolling foothills and then onto an expanse of endless sky. But the water below is crap. Literally crap. 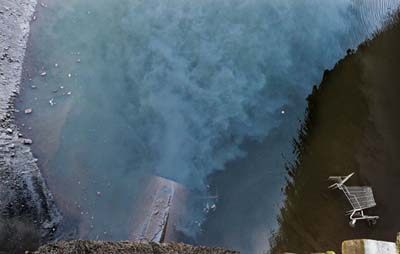 Raw sewage is seen being dumped into the Saint John harbour Thursday May 13, 2010. (ANDRE FORGET/QMI AGENCY)

For at least the past decade the people of Bragg Creek, a short drive outside Calgary, have lived with a “boil water” advisory because sewage from septic systems has drained into wells and the nearby Elbow River. Now preparing for a proper wastewater treatment plant and drinking water system, locals show up at information forums to debate the way forward.

“It’s not as if we don’t know better and are drinking bad water,” explains Gord McIIwain, chairman of a local water co-op, noting they’ve long learned to take precautions.

And it’s not, he adds, as if Bragg Creek is the only community where sewage runs raw.
This would be news to most Canadians, who flush their toilets and, if they think of it at all, believe the estimated .28 kg of fecal matter and 1,200 ml of urine they produce each day somehow is cleaned and polished and made fairly pure again.

But for our 143-year history we’ve had no national minimum standards for treating the stuff we flush down the toilet. QMI Agency waded in across Canada, studying the twists and turns of sewage systems in almost two dozen communities.

And as the federal government pushes for unified standards on our most basic human movement, it’s clear the difficult process is littered with politics, civic pride, bad engineering decisions of past generations, a constant lack of money and a vast difference from one Canadian community to another.

Toss aside plastic bottles and eco-friendly light bulbs. The sewage question is piling up to become one of Canada’s greatest ecological challenges.

This, as too many communities do little else with their raw sewage than let it spill into lakes, rivers and harbours. Officials have even come up with less offensive names to cover up the stink. Folks, that’s not poop in Halifax Harbour — it is just “floatables.”

Some of Canada’s 3,700 wastewater systems are top notch, treating our black water with ultraviolet lights, filtering tanks, chemicals and even micro-organisms to neutralize the nasty stuff in our sewage. 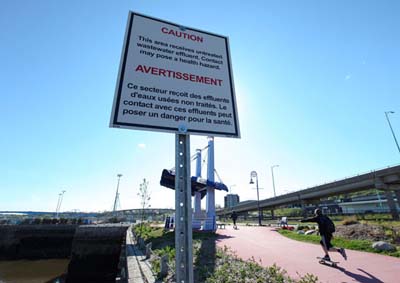 But other municipalities, 949 of the 3,700 to be exact, are below the standard known as secondary treatment — where water goes through a series of settling tanks, screens and treatments before being released.

In cities and towns where primary treatment is the norm, like Montreal, water is only flushed through a screen to skim out the solids, or in the case of cities like Victoria, B.C., and Saint John, N.B., where there isn’t even that minimum, toilet water slides from the bowl straight into the sea.

“All the chemicals we dump down our drain; human waste, pharmaceuticals, fertilizers and personal-care products create a cocktail of toxic chemicals that really do poison the environment in cities with poor treatment,” says Elaine MacDonald, senior scientist with Ecojustice.

William Oldham, a University of B.C. professor an expert in wastewater treatment, says “We’re just scraping the surface,” he says of ways to tackle toxic compounds riding along with our waste.

The United States addressed its sewage issues with the introduction of the Clean Water Act in 1972, requiring all U.S. municipalities to upgrade to secondary treatment. Now Canada is about to do the same.

Ecojustice, Friends of the Earth and several other groups also say the regulations only force cities to upgrade their sewage treatment plants, but don’t say enough about combined sewage systems where toilets, sinks and storm water drains empty into the same underground sewers.

Combined sewers are an important piece of the puzzle because treatment plants have a maximum capacity of sewage they can handle. During heavy rainfalls the combined sewers become overwhelmed and have to be turned off, sending everything out untreated. 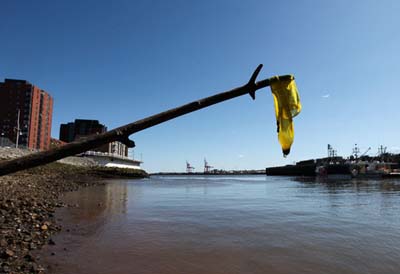 A condom is seen hanging from a stick the photographer is holding that came from the sewage outfall pipe in the Saint John harbour Thursday May 13, 2010. (ANDRE FORGET/QMI AGENCY)

Edmonton, for example, has a state-of-the-art sewage treatment plant, but 17% of the sewers are combined, Charlottetown, P.E.I., updated its plant to secondary treatment in 2007, but 20% of its sewers are still combined and it isn’t until pipes in cities like these are separated that raw sewage will stop flowing.

To have a truly modern sewage system municipalities have to emulate Fredericton, N.B., where there are no combined sewers and sewage is treated through a series of settling tanks, chemicals and ultraviolet lights that leave it clean.

Of course, upgrades like these costs a lot of money and so far the price tag is emerging as a major sticking point between the municipalities that have to upgrade their facilities and the feds, led by Prentice, who has already said there will be no new money to help cities through this modernization.

The feds have pegged the total cost of the upgrades at $5.9 billion over the 30 years, but officials with the Federation of Canadian Municipalities (FCM), the umbrella organization that represents cites to the federal government, tell QMI Agency it would probably be closer to three times that amount.

In a preliminary study, the FCM took a look at what it would cost to bring just four cities — Saint John, N.B., Halifax, N.S., Vancouver and Victoria, B.C. — up to the new standards and found it would cost a staggering $4 billion.

This doesn’t even include the city of Montreal, which has one of the oldest sewage systems in the country, delivering only primary treatment with two-thirds of its sewers still combined.

The FCM says it won’t be able to start these upgrades until it comes to grips with the $30 billion in repairs it needs to make to existing sewage and water systems just to stop them from falling apart.

“We support the regulations, we have to protect the environment, our lakes, our rivers, oceans and our people,” said Basil Stewart, president of the FCM and mayor of Summerside, P.E.I. “Hopefully we can work a deal with the other orders of government …to get a three-way deal in some shape or form to pay for this.”

But cities say municipalities end up with only eight cents out of every tax dollar collected, while provinces get about 42 cents and the feds 50 cents.

The FCM says property taxes in cities like Vancouver and Victoria, B.C., would have to jump by up to $1,200 and as much as $800 in Saint John, N.B., to pay for the upgrades if they don’t get the help they’re asking for.

It’s a great concern for municipal politicians who fear the federal government will be rewarded at the ballot box for improving sewage treatment, while politicians at the city level will get hammered for jacking up taxes to pay for it.

“The real issue that we have here is that Canadians don’t appreciate the value of what they are getting,” says Duncan Ellison, executive director of the Canadian Water and Wastewater Association, an umbrella group for the country’s municipal water and wastewater facilities.

Raw sewage is seen being dumped into the Saint John harbour Thursday May 13, 2010. (ANDRE FORGET/QMI AGENCY)

We don’t pay enough in water and wastewater fees and if we don’t pay enough, then the utilities don’t have the revenue to do the investments they need, forcing them to look for provincial or federal grants

With the regulations still in draft form, growing criticism from environmental groups and a clear battle emerging between the cities and the feds over funding, an end to the dumping of raw sewage into Canada’s lakes, beaches and rivers may be a long way off.